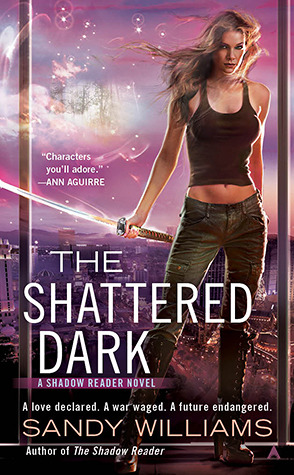 McKenzie Lewis has a gift. It allows her access to a world few have seen, and even fewer can comprehend. It’s her secret. And it exists in the shadows…
McKenzie was a normal college student, save for one little twist: she’s a shadow reader, someone who can both see the fae and track their movements between our world and the Realm. It’s a gift for which she has been called insane, one for which she has risked family and friends—and one that has now plunged her into a brutal civil war between the fae.

With the reign of the king and his vicious general at an end, McKenzie hoped to live a more normal life while exploring her new relationship with Aren, the rebel fae who has captured her heart. But when her best friend, Paige, disappears McKenzie knows her wish is, for now, just a dream. McKenzie is the only one who can rescue her friend, but if she’s not careful, her decisions could cost the lives of everyone she’s tried so hard to save.


The Shattered Dark picks up pretty much right where The Shadow Reader leaves off. McKenzie heads back to her place for a few things and discovers that her best friend Paige is gone. As in someone has made a mess of her apartment gone. So of course she has to go after her.

McKenzie in this book was still the same feisty heroine that she was in the first one. She is now in a relationship with Aren (this is not a spoiler- it is in the blurb). The relationship is completely adorable! He really is the guy for her. Strong, loyal, and most importantly able to put up with McKenzie. She is not difficult, but she definitely has some relationship issues. Which is understandable, she did wait 10 years for a guy. This is a relationship in which I can totally get behind- they really are cute together.

The action in this one seems ramped up a step. I love the politics of it all, and enjoyed watching Lena grow as a queen. Lorn, a shady character to begin with adds an extra sense of huh to the book. I feel completely bad for Kyol through out the entire book. Until the end- then I was just mouth open did that really just happen.

I pretty much loved this book that is until the end. Talk about a gamechanger event. Talk about a serious what the heck? moment. Followed by a really did that just happen? Then I remembered that I get to start the next book right away and so I stopped freaking out. Calmly went to bed and thought, McKenzie I will get caught up with you in the morning.

Favorite Quote “I won’t pretend I don’t have feelings for you.”

Lena- acting queen of the Fae
Paige- McKenzie’s bestie
Lee- friend of Paige’s foe to McKenzie
Hinson- evil fae
Lorn- fae who looks after himself.
Shane- another human who can read the shadows
Posted by Angela ReadingCave at 12:05 AM