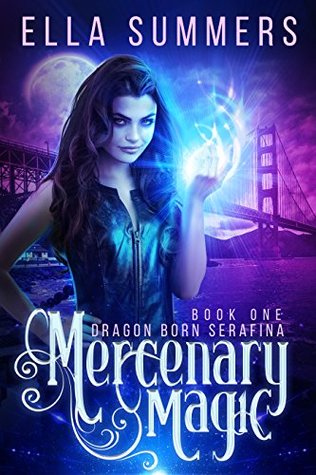 Long ago, the Dragon Born were hailed as the most powerful mages in the world. Today, they are condemned as abominations and have been hunted to near extinction.

Sera Dering has spent her entire life hiding her forbidden magic from the supernatural council who would kill her for the crime of being born. After years of drifting, she’s finally found a new life working as a low-grade mercenary for San Francisco’s oldest monster cleanup guild. She’s safe—as long as she pretends to be human.

But a dark and mysterious power is taking control of mages’ minds, and Sera’s guild sends her in to investigate. To save her city from a magical apocalypse, she must work together with a sexy and deadly mage who represents the very council that sentenced the Dragon Born to death. And if he finds out what she is, she’ll be next…


Sera Dering and her twin Alexandria have lived in fear of discovery their entire life. They have had to pretend to be humans to hide the type of magic that runs through their veins. They are Dragon Born, the most powerful and feared mages around. So feared that upon discovery the council kills any they find. Their magic makes them stronger than regular humans and so they both work as mercenaries. Sera along with her little brother, Riley live in San Francisco. When a member of Kai’s family gets caught up in the mysterious mage magic, he hires Sera to figure things out.

Sera is interesting in that she keeps who she is hidden and yet tries to protect the city anyway. She feels responsible for her brother, even helping to put him through school. She is kinda feisty, and well she can kick some serious monster butt. I like her internal dialog; it is extremely sarcastic which made me smile.

Overall, this is a good start to an interesting series. This one sets the ground work for a great romance with only a few swoony moments. That would be my biggest complaint. That and I felt that the ending left a lot of issues still unresolved. Hopefully the next book will answer some things.


Favorite Quote I feel obligated to at least check under your bed for monsters this time around.