Cover Reveal for Touch of Evil by Cecy Robson

Today I am excited to share the cover of Touch of Evil. International and award-winning author Cecy Robson shares the newest novel in her Weird Girls urban fantasy series. The tenth book in the Weird Girls series and first novel in the Touch series featuring Emme Wird.

The award-winning Weird Girls series has continued to delight fans with breathtaking paranormal romance stories told through Celia and Taran’s point of views. Now it is the youngest sister, Emme’s turn to share her story with readers.

Emme Wird, the healer and powerful telekinetic, hasn’t had the best luck with males. Her sisters have found their mates and their forever loves. After a series of disastrous dates, Emme will settle for a decent meal and polite conversation.

When the pack member Emme had dinner with is found dead, it is up to Emme and her werewolf pal Bren to solve his murder. But spine-tingling danger and touches with evil have ways of bringing close friends closer in ways neither would have expected.

Could the male Emme has searched for be right in front of her, as he has been all along? Or will evil snatch him away from her, just as it did once before?

Posted by Angela ReadingCave at 9:26 PM No comments: 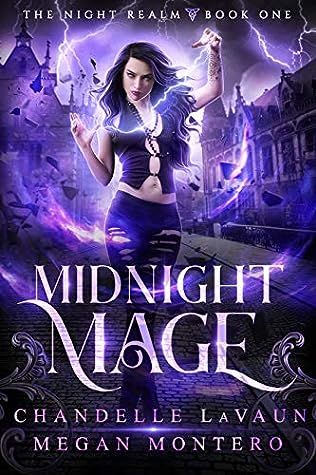 Or at least he must have, because none of this makes any sense. None of this can be real. I’m not a mage with magical powers…I’m just me. Ellie Sutton. Your average, everyday sixteen-year-old high school human student. My biggest concerns are bullies, failed exams, and missing the express subway twice in one day.

Magic is something I read about in comic books, it’s not real. People don’t move things with their minds or summon lightning with their hands. I don’t care what Stellan Wentworth says. It doesn’t matter that he’s breathtakingly beautiful or that his eyes sparkled when I challenge him. He’s the kind of hero found in romance novels, not my real life. I’m dreaming, I have to be.

Because if I’m not, then what he’s telling me is true. This gorgeous, terrifying world is in turmoil…and if I don’t learn how to use my magic overnight…they’ll all die.

Pick up Midnight Mage and enter The Night Realm today!

Dynamic Duo and Besties to boot- Chandelle LaVaun and Megan Montero have teamed up to give the world a whole new realm to explore: The Night Realm. I am here for this! Midnight Mage is the first book to release and it sets the stage. The world building is extensive and intriguing.

It’s Halloween and what can some cosplaying high schoolers want more than to win the costume contest at the party of the year? That is what Ellie and her friends are hoping to do, which is why they came to Tyler’s party in the first place. So how exactly did she end up playing spin-the-bottle and who was that guy she just kissed? And some kiss that must have been because all around her the hustle and bustle of New York City has gone quiet. The skyscrapers are gone and who the heck is that chasing her? Ellie’s world just got turned upside down… where is she? And can she really do magic? Enter The Night Realm and find out…

Ellie is proud of her geekdom status, her friends are fabulously hers and they get her. Her bestie is extremely popular, and that is just how Ellie likes it. She can join in and still avoid the center of the stage. Until a fateful game of spin the bottle, which has her stumbling into a different realm. Now although scared, Ellie knows that she has to suck it up buttercup. An evil guy is after her and instead of crying in a corner. Ellie is determined to try her best to master this new magic in her, she wants to survive and get back home.

Imagine growing up in a kingdom that has tyrants as rulers. The kind of ruler that cares only for themselves. Now, add in that those rulers are your parents- who you are ashamed of. Now you have the mindset of Prince Stellan. Yes, an actual freaking prince. Let me tell you, dang… cause Stellan is the whole freaking package. When he finds Ellie in his realm, he has to help her. Help her to know his world, know her power, and know just who he is. Rebellion is coming to his realm and it will take both of them to finish the fight.

The secondary characters at times steal the show, but only for a second or two. Nickle has a big personality, but it doesn’t overshadow Ellie’s. The dukes sense of humor and pure enjoyment of life makes you hope that there is a novella coming out staring them and well you. Melanie’s gentleness with introducing Ellie to the world and her ability to speak geek leave you wondering…just who or what she is. Araqiel’s guidance of how to overcome the obstacles (trying not to give spoilers) is well just hilarious. #Tacosforlife

The world building is spectacularly done, without it being cumbersome to learn. Ellie and Stellan make a fabulous team, one with mutual respect and a fair amount of chemistry. The action scenes are fun, with a fair amount of whole crap who will win in the end. Speaking of endings…holy cliffhanger, batman- so unfair. I seriously kept trying to turn the page on my kindle to find out what happens next.

Favorite Quote “Mistakes were made.”