Format: eBook
Print Length:432 pages
Publisher: Kensington
Published: April 24, 2012
Ever since her ex-boyfriend spread lies about her, Becca Chandler is suddenly getting all the guys - the ones she doesn't want. Then she saves Chris Merrick from a beating in the school parking lot. Chris is different. Way different: he can control water - just like his brothers can control fire, wind, and earth. They're powerful. Dangerous. Marked for death.

And now that she knows the truth, so is Becca.
When Hunter, the mysterious new kid in town, turns up with a talent for being in the wrong place at the right time, Becca thinks she can trust him. But then Hunter goes head-to-head with Chris, and Becca wonders who's hiding the most dangerous truth of all...

You know when you like a book but you just are not sure why. That was Storm for me. I liked it plain and simple. I will of course read the other books in the series. It was a fast enjoyable read that allowed me to escape from reality for a while. Chris is cute, although a little insecure. Becca could be a total witch at times but given what she has been through I kinda could understand. Hunter was a little too over confident for my taste- although it works well against Chris’ unsure moments. Chris is everything that a girl says she wants in a dude but never picks. Hunter is kinda who your mom warns you to stay away from (although I could not for the life of me tell you why).
Elementals are powerful, sometimes too powerful like Chris and his brothers. This causes all of them to be in danger. Someone will try to kill Becca as well, due to her knowing the secret. The attempted murderer was not who I would have guessed. So the ending was a total surprise.

Quinn- Becca’s best friend, the only one to stand by her. Her home life sucks.
Nick- Chris’ older brother (Gabriel’s twin), he is the peacemaker in the family, element is air.
Michael- The oldest brother, who happens to have custody of the other three. A tragedy happened while he was a teen and so he shoulders a horrible burden.
Drew- Becca’s evil ex-boyfriend. I hate his guts and I bet you will too.
Tyler- There was a Dennis Leary song a while back called "I'm and @sshole...." Sums him up pretty well.
Posted by Angela ReadingCave at 9:10 PM No comments:


As the highly anticipated second novel in the Cryptid Tales series, Capture is sure to satisfy the YA SciFi reader. This action packed story picks up right where Reveal left off with Shay realizing that someone she holds close may not be totally lost. But can Hugh, her cryptid mate, protect her from the evil Malsumis? Or will she fall victim to his horrible plans?
One this is for sure, Shay is in for the fight of her life.

This book begins right where the first one ends, Shay and Hugh at the Senior Shuffle.  Erica, one of the meanies from book two and several of her minions show up.  She tries to capture Shay and Hugh but Olivia to the rescue.  Shay and Hugh along with Olivia get away.  They drop her off and tell her that she doesn’t know them.  This part makes me sad, as Olivia was my favorite character from book one in the series.  They of course hide and regroup- with several other cryptids joining forces.  The new characters help her to fight Malsumis and his followers.  Since this is the second in series you know of course that there is no resolution between Shay and Malsumis yet.  But the second book was fast paced and with more action.  So that was a plus.  Another thing that the author has going for her is that there is still no love triangle.  Praise all that is holy!  Although Shay and Hugh could cut back on telling each other I Love You just a little.

Beula- small character but totally awesome part.  I wish I had a cryptid like her in my house growing up.  That would totally rock!
Emina- is back she was in the first book just didn’t really think we would see her again.  I like that she does not play coy with her emotions.  What she is experiencing she vocalizes.
Lacey- A cryptid, I am so not giving away what type, who has actually escaped from the Malsumis compound and was not bitter.  She actually becomes my favorite character in this book.
Nashima- This cryptid is one that is hard to read.  Is she evil or good?  I will never tell....
Posted by Angela ReadingCave at 9:44 PM No comments:

Shay Tafford's childhood has been fatherless, filled instead with memories of speaking to those who have passed on. She does this while hiding her unique ability from those living around her. She can't tell her best friend, or her brother, and she definitely can't confide in her psychologist mother for fear of her mom locking her up.That's why it's been comforting to have Jeremy, a seventy year old child ghost, as her confidante. But recently he's been absent, perhaps lost as her father is. When Shay meets Hugh, the boy she's had a crush on for weeks, and finds he can speak to ghosts too she's just starting to find a normalcy in her life. But as Hugh reveals the truth to Shay, about who she really is and about what it is she can do, he erases all chances she had at a normal existence. Turns out talking to ghosts is just scratching the surface of her genetically engineered gifts. Shay learns she may be part of an age old prophecy that could save an entire race of beings. But can she?

Now there is the threat of an attack from a dark force with unlimited power and she must decide if she accepts her fate as a part of the prophecy. Can Shay and Hugh defeat this evil and save the people they love, before they too are lost forever?

My Thoughts
I liked it.  I enjoyed the new concept of "cryptids". A "cryptid" part human, part animal; some of whom have special powers. I was grateful that there were no werewolves in the book regardless of the animal/human gene.   I was very happy that there was not a love triangle.

There were parts of it that I tended to roll my eyes at- the instantly in love with him part, the being okay with him taking her out of the state part (without telling her) and the parental figure not freaking out about any of this.  But all in all the book was pretty good.  As I read I decided that I seriously had to know what happened with Shay and Hugh.

My favorite character in the book is one that we do not see often, Olivia, Shay's living best friend.  There is something about her that is refreshing.  But that tends to happen with side-kicks.

Least favorite character is a little child ghost name Wendy.  She kinda creeps me out.  I think that she is evil, the entire time I am reading the book.
Posted by Angela ReadingCave at 9:19 PM No comments: 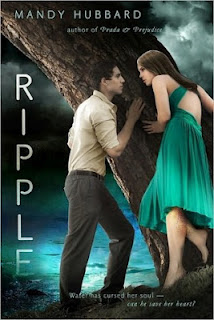 Lexi is cursed with a dark secret. Each day she goes to school like a normal teenager, and each night she must swim, or the pain will be unbearable. She is a siren - a deadly mermaid destined to lure men to their watery deaths. After a terrible tragedy, Lexi shut herself off from the world, vowing to protect the ones she loves. But she soon finds herself caught between a new boy at school who may have the power to melt her icy exterior, and a handsome water spirit who says he can break Lexi's curse if she gives up everything else. Lexi is faced with the hardest decision she's ever had to make: the life she's always longed for - or the love she can't live without?

My Thoughts
The author opens the book with Lexi, the heroine, admitting to killing her first love.  The book description alerts the reader to this so it was no surprise.  Before the tragedy, Lexi was in the "in-crowd", on track to be valedictorian and well-liked.  Afterwards, Lexi becomes an "Ice queen" and avoids contact with everyone but her grandmother.  So much so that her old friends treat her terribly and she does nothing to defend herself because of the guilt.  Two years has passed since the tragedy and Lexi is completely ostracized by everyone at school.  To the rescue is Cole, her first love's best friend.  He starts to talk to Lexi in English class on the first day of school her senior year.  The beginning of romance happens here...Cue the new guy to the school.  Lexi pushes Cole away and in walks Erik.  Insert eye roll.  Darn another love triangle, does anyone else ever wonder why the nice guy never gets the girl? This one however is not really what you think it is and the author actually did surprise me.

Best thing about this book- there is an ending.  No cliffhanger, no waiting until the second and third book to find out what happens.  Don't get me wrong I HEART BOOK SERIES.  But sometimes you just want to read a book that has an ending instead of a continuation.

Sienna is Lexi's old best friend, and her first love's sister. Sienna comes off as a self-righteous spoiled brat.  She apparently was not a really good friend if she could not see how much Lexi had needed her.

Gram is Lexi's granny.  She is pretty sharp and is beginning to think Lexi no longer has friends.

Erik the new kid.  You know those characters that you just hate but for no reason.  That was Erik for me.  No reason, just really did not like him.

Posted by Angela ReadingCave at 10:40 PM No comments:

Series that I love

I tend to read a lot.  Through my readings, I have found that I currently am a little obsessed with young adult fiction.  Which is strange since I only started reading them in my late twenties.  I typically read books about the paranormal or that contain elements of fantasy.  I almost always read at night.  This is due to my children being asleep and me needing quite time.

Since I read a lot there are a few series that I have discovered.  They are listed alphabetically by author, then series name.

I will be honest several of these authors I would have never heard of without my Kindle.  Some of these authors are well known, established writters.  Some currently do not have hard/paperback copies of their books published.  But I think that is part of what I like about them.  That not everyone and their mother has read them.  Since I use reading as a way to escape it is almost like I am on a private island where only the elite can go.  But as they continue to get more followers via social media mediums I know that the island will become more public than private.  That is okay though.  Then I can say I told you so- these author's truly do rock.
Posted by Angela ReadingCave at 7:58 AM No comments:

Some people like to paint, others dance- I like to read.  I absolutely love books especially young adult paranomal series.  They tend to allow me to escape from reality.  I decided to start this blog to share my love of books.
Posted by Angela ReadingCave at 9:05 PM 1 comment: