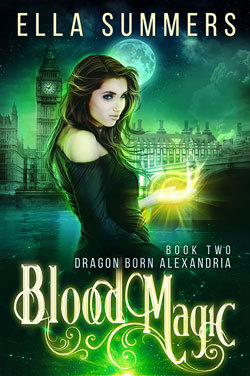 Branded as an abomination, Dragon Born mage Alex Dering has spent her whole life hiding what she is—a secret her father died to protect. Eight years after his death, Alex finally gets the chance to track down the mage responsible.

But her vengeance is put on hold when she gets a lead in London on the Blood Orb, a magical artifact with the power to control vampires. Retrieving the orb from the hate group that holds it won’t be easy; thwarting their plan to exterminate every supernatural in the world will be even harder.

To make matters worse, a mysterious killer is stalking Alex’s every move, determined to end her life. To survive this, it will take all her magic, a lot of help from a dangerous ally, and a really big sword.


Blood Magic picks up right where Magic Edge ends. Alex, Logan and her bestie Marek are still hunting the orbs. Logan’s momma is still the evil leader of the Convictionites. Logan is still looking into the death of Alex’s daddy-who hired the assassin Nightshade and why. After a particularly bad battle Alex and Logan go home- well to Marek’s home, in England. Alex gets a rare chance to talk to Sera, who sent her a present- Naomi. (Side note- maybe this means that Naomi will get her own book.) Naomi is here looking for her missing cousin, Eva who just so happened to once be madly in love with Marek. When he finds out she is missing, things get serious. The hunt for the blood orb gets even more dangerous as a new assassin is after Alex- why? Is it because of who she is? What she is? Or maybe it is her connection to Logan.

The chemistry between Logan and Alex is off the chart in this book. Two people have never been more suited for each other. As an assassin Logan is deadly, as an assassin in love he is legendary. Nothing and no one can hurt Alex. I love the fact that he lets her jump into danger, I adore the fact that she is non-judgmental of his lifestyle. They both accept and love one another.

Alex cares deeply about the missing hybrids. She will stop at nothing to find them. Because she cares, Logan cares. She is good for him. Alex rushes ahead with an action plan, she is reckless. Because Logan has to have a plan, she plans. He is good for her. The changes that occur are scary- yet they face them together. Logan’s mom, yeah she is evil. Yeah she masterminded her own son’s powers. You gotta hand it to the woman though, she has style. That last chapter…yeah she has style.

The action in this one is face-paced, spot-on. You honestly will not be able to put it down. If you like an action book, with a good plot and great chemistry that is. I am enjoying this series and cannot wait for the next book to come out.

Favorite Quote I will make him feel the torment I would have felt had you died tonight.