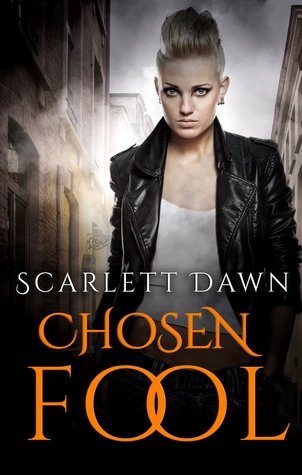 Caroline Jules has received news of a lifetime. She’s going to be Queen to ‘her’ people. Instead of running, as any sane criminal would, she faces the mêlée with all the wits and savvy that her difficult life has honed. With her best friend, Sin, at her side, Caro pushes past the animosity her power inevitably brings, and prepares to rewrite her future.

Until the night Sin leaves, and she is alone.

Now, Caro must face the Royal world and all its intrigues and intricacies by herself. People aren’t always as they appear—and danger lurks behind even the most pleasant face. When a threat not even the Elders can handle puts her new tribe in danger, Caro takes matters into her own hands. Armed with the power of the mysterious spirit Elementals, Caro’s determined to eliminate the evil ransacking the Mysticals. All she needs is time.

But time waits for no fool…and time isn’t as straightforward as it seems.


Chosen Fool is the second book in the Caro sage of Evermore. Caro is the prodgy for the Elemental King. As a spirit Elemental this should not have happen.

Caro is back and better than ever. Her quick razor sharp wit and even sharper mouth will of course land her in a lot of trouble. Yet, she has a heart of gold and will do anything to protect her people. That is the supernatural monarchy and other prodigies. I kinda feel bad for her, she goes on an emotional rollercoaster ride in this book.

The kings and Queens from the first sage start to grate my nerves in this book. When will they learn? It was the same when they were prodigies. Caro is the prodigy now- they need to trust her. At one point she does call them out on it- I literally cheered Wooowhoo Caro! That a gal!

Leric is a major part of the story line. Caro still doesn’t know if she should trust him. Which is starting to get to him, he is making mistakes. Which hopefully will be his downfall. Okay, so not a Leric fan- hated him in the first book, and the first half of this one. Then about midway, I totally start to fall in love with him. Talk about an awesome story line. (I am avoiding spoilers here.)

Sin, oh how I shipped you and Caro! Then you leave. I understand it, I don’t like it. I yeah, kinda feel betrayed just as Caro must feel. You hurt my girl deep with this move. Maybe you were right to leave but with you, you took my shipping of the two of you together.

Chosen Fool really is an epic adventure. Character growth occurs like I have never read before. Relationships get built, torn apart, and rebuilt. The mystery of the big baddie is kinda revealed. The ending was legendary! With lots of OMGs and What the hecks thrown in with a how do we move on from here. Now the tortuous wait for the next installment can begin.

Favorite Quote “Finally someone here is thinking outside the box to understand us.”