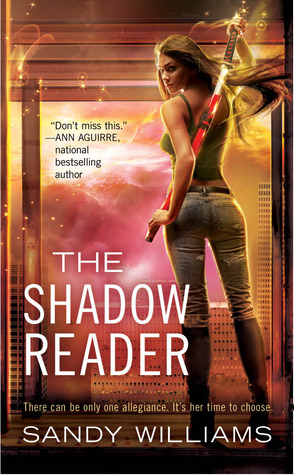 There can only be one allegiance.
It’s her time to choose.

Some humans can see the fae. McKenzie Lewis can track them, reading the shadows they leave behind. But some shadows lead to danger. Others lead to lies.

A Houston college student trying to finish her degree, McKenzie has been working for the fae king for years, tracking vicious rebels who would claim the Realm. Her job isn’t her only secret. For just as long, she’s been in love with Kyol, the king’s sword-master—and relationships between humans and fae are forbidden.

But any hope for a normal life is shattered when she’s captured by Aren, the fierce and uncompromising rebel leader. He teaches her the forbidden fae language and tells her dark truths about the Court, all to persuade her to turn against the king. Time is running out, and as the fight starts to claim human lives, McKenzie has no choice but to decide once and for all whom to trust and where she ultimately stands in the face of a cataclysmic civil war.


For ten years, McKenzie has been in love with Kyol. She has also been the fae kings Shadow Reader, looking into portals and being able to tell the king where one the fae has gone. She doesn’t know the politics of the fae kingdom, she only knows the king needs her help. She has gladly given it, risking everything in our realm to help them save theirs. Now McKenzie is caught in a war, one Kyol has for the last ten years kept her out of. The rebels have found her, planning to use her. Kyol will do anything to get her back. The main rebel strategist Aren, would do anything to turn her to the rebels side. McKenzie just wants to survive.

McKenzie is a character that I can get behind, cheering for her the whole time. She tries to be logical- sometimes even a little too logical. Ten years is a long time to wait for someone to act on love. She knows that Kyol and her can’t be together, she does try to move past her feelings for him. When the rebels present their story, she remains true to the king. She attributes her attraction to Aren to Stockholm syndrome. She fights back- taking no prisoners.

Aren is a rebel with a cause- survival of his people. He stays true to the cause the whole time. The thing I like about him the most though is that he follows his instincts. He trust his decisions to work out in the end. He is attracted to McKenzie yet knows that she loves another. He point blank tells Kyol that he now has competition. I mean who does that? I enjoy the chemistry between the two.

The world building and secondary characters are pretty incredible. This is a book that is fast paced and entertaining. It also allows you to see both perspectives on the war- which is interesting. There were very little questions left at the end. Thank goodness for no cliffhangers. Yeah there is a bit of a love triangle (so if you avoid them- you have been warned). This love triangle is different than others- I can’t really explain it though.

Favorite Quote “I’ll fight for the chance to be with you.”

Kelia- rebel fae, in love with a human.
Nico- human in love with Kelia
Lena- mean fae gal
Posted by Angela ReadingCave at 12:05 AM