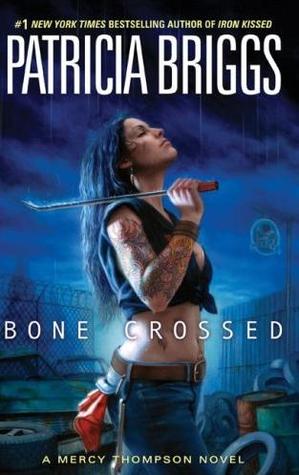 By day, Mercy is a car mechanic in the sprawling Tri-Cities of Eastern Washington. By night, she explores her preternatural side. As a shapeshifter with some unique talents, Mercy has often found herself having to maintain a tenuous harmony between the human and the not so human. This time she may get more than she bargained for.

Marsilia, the local Vampire Queen, has learned that Mercy crossed her by slaying a member of her clan—and she's out for blood. But since Mercy is protected from direct reprisal by the werewolf pack (and her close relationship with its sexy Alpha), it won't be Mercy's blood Marsilia is after.

It'll be her friends'.


This is not a stand-alone novel, this is the fourth book in the series. Reading it first will confuse the snot out of you. You seriously need to read the first three books to understand this one, and probably to understand my review.

Bone Crossed begins a few days after the events in Moon Called happened. The events that should have had seriously traumatized Mercy. For some reason though she is taking it all in stride, which I am not sure is actually a good thing. She does have panic attacks because of the Moon Called events but I just feel like there should be more of an emotional reaction. I would seriously hate to be Mercy. I mean can the gal ever catch a break?

After the horrible events of Moon Called she now has a vampire coven out for revenge on her behind. As Adam’s mate, her enemies are now the pack’s enemies. (How she becomes Adam’s mate is either going to make you happy or tick you off- there is no happy middle on this one.) Amber, an old friend shows up out of the blue and Mercy agrees to help her. Her son, Chad is seeing ghost and Amber needs Mercy to figure it out. This has her leaving town for a few days so that Adam can try to sort things out with Marsilia. Marsilia is also mad at Stefan and so he goes with Mercy when she goes out of town sort of like a body guard. While out of town Mercy attracts the attention of Blackwood, a powerful vampire who is just plain evil. When they get back to town all hades breaks loose with Marsilia and Stefan.

Mercy is still the snarky mechanic that we met in the first book. I like that she is having some type of reaction to what happened to her. I just don’t feel like her reaction is realistic. Adam gets a little on the possessive side in this one. He is gentle with her, and he does try to help her. He just doesn’t like other guys around her at all but again very understandable reaction. I felt bad for Stefan, the things that Marsilia puts him through are heinous. Her rational for it was however very logical and probably for the best.

If you are already a fan of Mercy and you are invested in her story then you are probably going to like this one. There were times while reading, I wanted to shake Mercy and ask her where her back bone was. I mean, the first three books she was a strong independent woman. In this one, not so much which could be a hidden reaction of her being attacked. I don’t know. I am not sure after this one though that I am going to continue in the series.

Favorite Quote “Not to worry about what had been or what would be, just the now."