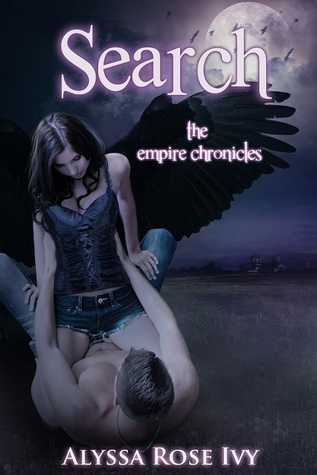 Casey isn't human. The revelation should terrify her, but it doesn't. Instead it excites her. Too bad not everyone is as excited as she is.
Torn between two lives, the only one she's ever known and her life as a paranormal princess, Casey has to decide whether she can trust the man she loves.
Sometimes being a princess isn't all it's cracked up to be.


Search is the second book in “The Empire Chronicles” which is a spin-off of “The Crescent Chronicles”. If you have not read the first book in the series Soar than you may want to avoid this review.

At the ending of Soar Casey finds out that she is a Pteron- in reality not just any Pteron but Levi’s little sister. That is right boys and girls she is the long lost sister of the new King of the Pterons. Once her grandma Georgina finds out who Casey is she decides that Casey needs to be living like the princess that she is and swoops in to save the day. Georgina is a character and a half one in which the reader will come to love.

In Soar, we had a love triangle- Casey, Toby and Jared. I have always been a Jared fan so I was cheering for him in Soar. In Search he acts like such a donkey I just cannot be on his side anymore. Once her parentage is revealed, Jared treats Casey like any of his previous girls. Pretty much like crap which leads her back into Toby’s arms. Toby for his part takes her back and doesn’t really seem to mind all the crap that she did at the beginning of their relationship.

Casey is intent on finding her sister Vera- who is with some bear Pterons. Will she like what she finds? Is her sister who she thinks she is? Is Murphy really that big of a threat or is there a bigger one in the horizon? Someone will betray them, but who?

Soar ended in a cliffhanger and a love triangle. In Search the love triangle seems to be resolved but there is another cliffhanger. This cliffhanger threw me for a loop. I was not expecting the big baddie to be who it was. I was literally thrown. It even took me a minute to re-call the person in my head.

Search was a noteworthy sequel to an enjoyable book. The cliffhanger leaves the reader wondering when Stay will be published. What will happen to our favorite shapeshifters?  How much trouble is Jared, Levi, Allie and Casey in?

Favorite Quote “Please find a way to forgive yourself. That’s the one thing I can’t do for you, and you know I’d do anything for you.”