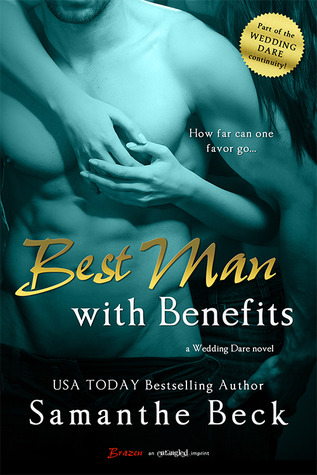 How far can one favor go…

Logan McCade arrives at his best friend’s wedding overworked and in desperate need of a vacation, only to discover his best man duties have been…expanded. He must coax Colton’s sister out of her shell, or risk her hiding in her room all week. Logan figures he can handle one introverted bridesmaid, but he’s not expecting how much he enjoys “handling” Sophie…or how much she enjoys being handled.

Socializing has never been web designer Sophie Brooks’s strong suit, but she’s determined to shed her wallflower image and embrace the “New Sophie”—a feat made easier with the supremely sexy Logan McCade tempting her to explore all her forbidden fantasies. If she’s not careful, she just might fall for the best man.

Sophie’s sweet, sexy, and delectably awkward demeanor brings much-needed calm to Logan’s hectic life. With the nuptials only days away, Logan is forced to face the possibility that his favor to a friend might have become something else entirely…and that he’s not willing to let Sophie go. Ever.

Colton Brooks’ best man is Logan McCade the Logan McCade. A workaholic whose family and friends are worried will only have time for his business. As the best man he is given the task of babysitting Colton’s shy little sister- Sophie. As Colton’s old college roommie, Logan remembers Sophie as the shy sweatshirt wearing awkward teenager that would visit Colton sometime. Unfortunately for Logan Sophie has grown up. Sophie is still an introvert- but that is something she is working on. As a computer programmer, she does not have a lot of interaction with other people. So socializing is not her strong suit.

My favorite thing about this book though is how Colton brings Sophie out of her shell. He doesn’t let her sit in the corner and do nothing. He gives her adventures- even if she doesn’t really want them.

Favorite Quote “Have you seen your butt in jeans? Until you have, you’re not qualified to comment.”

Colton- the groom, Sophie’s big brother, Logan’s best friend
Regan- another bridesmaid- likes the looks of Logan
Kady- the bride
Posted by Angela ReadingCave at 12:05 AM