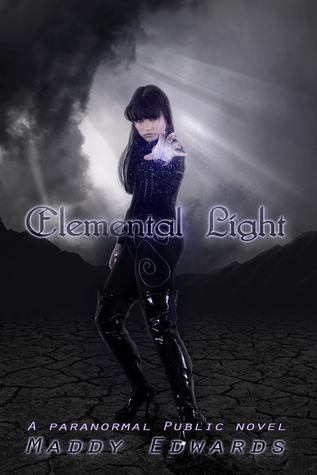 Charlotte Rollins would have liked to graduate from Paranormal Public like any other student, but the facts won’t be denied: Darkness has risen, and there will be no graduation for Charlotte and her friends. If the darkness premier recovers the Mirror Arcane, eternal night will surely follow. Charlotte has just one chance to save everything and everyone she holds dear.

Instead of finals, there is war. Instead of love, there is loss. And instead of hope there is a gaping black hole. Lisabelle has gone to darkness, friends are dying, and Charlotte is forced to make unforgivable choices. If you love someone so much that you have to lose him, what was the point in the first place?


The final book in the Paranormal Public series does not disappoint. Not only does Elemental Light finish off Charlotte’s story, it also lays the foundation for a new series called The Devious Chronicles.

Over the course of this series Charlotte has gained and lost so much. Gained the knowledge of who and what she is. Lost the love of her life, Keller and her best friend Lisabelle to darkness. She doesn’t know if she will get them back, all that she does know is that she has to try.

The Darkness Premier wants something that Charlotte has, the Mirror Arcane. Charlotte must protect this item with everything she is. This proves to be difficult when those thought dead turn up to be well alive and rebelling against the government.

Sip, her other bestie, is consumed with the thought of Lisabelle dying due to the amount of darkness inside of her. Her major goal is prevent this from happening. In order to do that though, she will need access to the archives.

Elemental Light ties up the story nicely although there are a few questions that are not answered. Hopefully the spin-off series will address these.


Favorite Quote "I can't explain, but trust me when I tell you I'm always on your side.  Whatever side that is."

Lanca- Vampire Queen waiting to take back her throne.
Lisabelle- darkness mage, everyone but a handful are terrified of her. She kinda rocks my world.
Sip- tiny ware-gal born into a family of males, people underestimates her due to her size. She is a bossy gal though, with some backbone.
Keller- Fallen Angel, Charlotte’s ex-boyfriend
Lough- dreamweaver, in love with Lisabelle
Posted by Angela ReadingCave at 12:10 AM