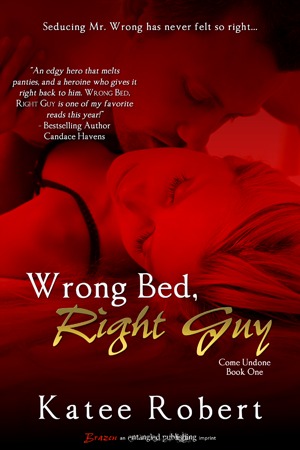 Prim and proper art gallery coordinator Elle Walser is no good at seducing men. Heck, she’s been throwing hints at her boss for months, but he’s completely clueless. Desperate to escape her mother’s matchmaking efforts, she comes up with a plan—buy some lingerie and climb into her boss’s bed. The plan goes brilliantly…until she accidentally seduces a sexy stranger instead.

Bad boy nightclub mogul Gabe Schultz just had the best almost-sex of his life. Too bad the smoking hot blonde thought he was his brother and bolted before he could finish what they started. Though her holier-than-thou attitude puts a serious damper his mood, Gabe’s never been one to give up on something he wants. And he wants Elle. But does a man who lives on the dark side really have a chance with a proper lady?


Elle has only had one relationship- a relationship that ended very badly, very publicly with her big brother in trouble. Her momma is nagging her to get married and give her grandbabies- gotta love momma’s like that (they make for great books). Elle doesn’t trust her taste in men, so she decides to take life by the lingerie and climb into bed with her boss. He is safe, stable and really she isn’t that attracted to him so he has to be good guy. She tiptoes up the stairs to his loft and climbs into the bed up there. Holy smokes! Does this guy know how to kiss! Holy smokes…. is she responding to him! Holy smokes- he is not her boss! She does what any sensible young lady would do in this crazy situation- run!

Gabe is her boss’ brother and he decides that he wants to see where this spark takes him. After all chemistry like this does not come along very often. He talks Nate into helping him out with tidbits about Elle. Truth be told though Nate doesn’t know that much about her, except that she is really good at what she does.

Gabe and Elle couldn’t be more missed matched, and yet rooting for Gabe was natural. Elle was so prim and proper- Gabe so not. Elle tries to maintain a distance between them-Gabe overcomes it. Elle gets her feelings hurt- Gabe finds a way to fix it. Gabe gets her to do things that she never would have done before. There were times when I did not think that Elle deserved Gabe. I mean talk about a guy willing to go the distance. I get that she was burned before but come one already- one bad apple doesn’t mean you should never bite into another one.

Wrong Bed, Right Guy is an entertaining read. Elle and Gabe make an unlikely pair but I enjoyed how he dealt with her. I especially love his reaction to her parents- I won’t tell you more expect you should read this book if you want to laugh out loud, cringe and sigh a few times.