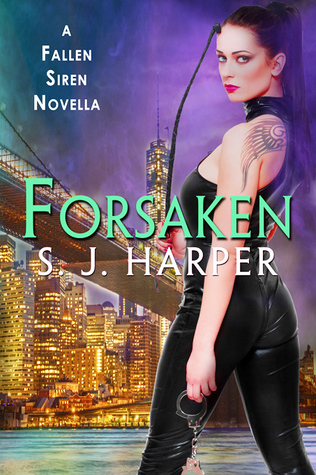 Join Agents Emma Monroe and Zack Armstrong.
She protected him. He loved her.
They can trust one another with their lives, but what about their hearts?

Special Agent Emma Monroe is a Fallen Siren seeking redemption. Thousands of years ago, she was banished from Mount Olympus by Zeus and cursed by Demeter for failing to prevent the kidnapping of Persephone by Hades. Now she’s working for the FBI, seeking salvation while searching for and finding the missing. Her partner, Zack Armstrong, is a werewolf with a grievance of his own.

The former Black Ops sniper who once carried out a string of questionable assignments is atoning for his past. Ironically, Zack’s just discovered an important piece of his past has been magically wiped from his memory—an affair with Emma. It doesn’t matter she used the spell to save his life, that’s something he’ll never know. With trust eroded and love overshadowed by betrayal the only thing holding them together is the job.

When the son of multi-billionaire Roger Maitlan is kidnapped and his babysitter murdered in cold blood, Emma and Zack travel to New York to work the case. They go undercover, infiltrating a playground of private dungeons where those who are rich and powerful can live out fantasies without consequence. What they find is a conspiracy born of a twisted mind and fueled by greed. The clock is ticking. Will Zack and Emma be able to find the missing boy and their way back to one another?


At the ending of the last book Zack and Emma were no more. Zack found out that Emma had taken his memories and he is well pissed. He has every right to be, he just has no clue it was to save his life. I think if he did his reactions would be a bit different. Zack puts in for a transfer and his boss denies it- then sends them to New York to find a kidnapper. Zach has a past with the father of the missing boy. This makes Roger trust him more than a victim would normally trust the FBI.

The tension between Zack and Emma in Forsaken is tight. They are good at putting their differences aside for the case but when those two are alone man, it’s hard. I understand Zack’s anger but he has to know deep down that there is more to it then what is on the surface. Emma had a reason for taking his memories, a good reason. He should know by now that she would not purposely hurt him without a cause. He should also be able to recognize that she herself is hurting.

Emma for her part knows she was wrong. She also knows that she was right. His life is more important than their love. It always will be- that is what makes her a great heroine. She puts the gains of others over her own. I like how Emma isn’t begging for forgiveness- she just accepts his anger as her due.

Zack and Emma have been through a lot. They both deserve more than what they are getting out of their partnership. Is redemption only one rescue away? That is the answer for another time. Forsaken moves the series along in a nice way. A way for the reader to get resolution from the events that occur in the previous novel.

Favorite Quote "Just don’t ever, ever, trust me with your heart."

Roger- son is kidnapped
Regina Torres- special agent in charge, annoyed that more agents were brought in
Eve- holds a grudge against Roger
Posted by Angela ReadingCave at 12:05 AM