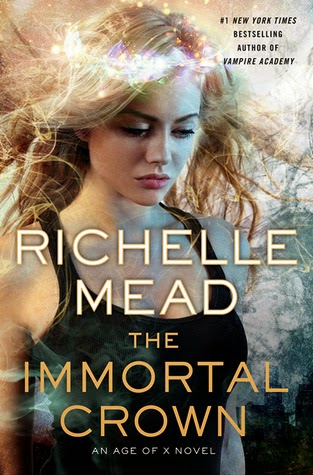 The #1 New York Times bestselling author of the Vampire Academy and Bloodline series returns with the second installment in her acclaimed Age of X series.

Gameboard of the Gods introduced religious investigator Justin March and Mae Koskinen, the beautiful supersoldier assigned to protect him. Together they have been charged with investigating reports of the supernatural and the return of the gods, both inside the Republic of United North America and out. With this highly classified knowledge comes a shocking revelation: Not only are the gods vying for human control, but the elect—special humans marked by the divine—are turning against one another in bloody fashion.

Their mission takes a new twist when they are assigned to a diplomatic delegation headed by Lucian Darling, Justin’s old friend and rival, going into Arcadia, the RUNA’s dangerous neighboring country. Here, in a society where women are commodities and religion is intertwined with government, Justin discovers powerful forces at work, even as he struggles to come to terms with his own reluctantly acquired deity.

Meanwhile, Mae—grudgingly posing as Justin’s concubine—has a secret mission of her own: finding the illegitimate niece her family smuggled away years ago. But with Justin and Mae resisting the resurgence of the gods in Arcadia, a reporter’s connection with someone close to Justin back home threatens to expose their mission—and with it the divine forces the government is determined to keep secret.


The Gods are getting restless- via for followers in a world where religion is strictly regulated. Justin is in charge of regulating several sects both inside the RUNA and outside. Mae is his bodyguard. The Immortal Crown takes place several weeks after The Gameboard of Gods ends. While away on a mission Justin’s family and Tessa are attacked. Mae arranges 24 hour protection with using her friends and comrades.

Lucian Darling, Justin’s college roommate and friend, is trying to grain votes by taking an envoy into Arcadia-a primitive country that borders RUNA. He forces Justen and Mae to come along. Mae has her own reason for agreeing. She is looking for her missing niece. What she finds in Arcadia may be more than she bargained for.

A thrilling second book in a provocative series. An emotional rollercoaster that will leave you with more questions than answers. The events of the last half of the book are game changers that leaves this reader asking- where do we go from here? Can Justin and Mae survive what occurred? Where the heck was Mae’s god? Will she switch sides? What the heck is Loki up to? Good Lord will they ever be together now? There is no moving past this.


Favorite Quote What surprised him the most was that it triggered a sense of unworthiness in him.


Lucian- Justin’s friend and a politician, so we know he can’t be trusted.
Mangus and Horatio- Justin ravens- they are pretty much his besties, who never leave him
Val and Dag- Mae’s best friends
Tessa- Justin’s charge
Posted by Angela ReadingCave at 12:05 AM