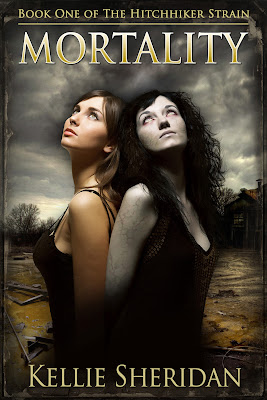 After surviving a deadly plague outbreak, sixteen-year-old Savannah thought she had lived through the very worst of human history. There was no way to know that the miracle vaccine would put everyone at risk for a fate worse than un-death.

Now, two very different kinds of infected walk the Earth, intent on nothing but feeding and destroying what little remains of civilization. When the inoculated are bitten, infection means watching on in silent horror as self-control disappears and the idea of feasting on loved ones becomes increasingly hard to ignore.

Starving and forced to live inside of the abandoned high school, all Savannah wants is the chance to fight back. When a strange boy arrives with a plan to set everything right, she gets her chance. Meeting Cole changes everything. Mere survival will never be enough.


Zombies are the new vampires, sort of like black is the new pink. A team of scientists accidentily creates the zombie strand and sets it loose on the world. Morality is what happens after the virus is released.

There are two female leads in this book~ Savannah and Zarah. There are flipping points of view from opposite sides of the world and time. This confused me in the beginning and took me a while to get used to. Zarah stories starts 2 days after the outbreak and Savannah starts six months after the outbreak.

Savannah is an act now question later kinda gal. This can get someone in trouble when it is the end of the world. She does own up to her mistakes though and tries to set them right. For this alone~ you have to love her. Savannah will protect those she loves, regardless of the consequences to herself.

Zarah was well to be honest, a weak character. It’s the end of the world and she hides out instead of fighting back. This was a little too weird for me. Her point of view is valuable for the story and it is interesting to note how the world is handling the ending coming.

The two guy love interests were not really that interesting to me. Cole was okay- but I kept feeling like he would ditch Savannah if something new came along. No clue why I felt this way, just did. Liam was well Liam- always there to help Zarah and tries to protect her. I couldn’t help but feel like if this was not the end of the world then these two would not have stuck it out with the heroines.

Morality is a nice start to a series with great potential. I am looking forward to the next in the series to see where Kellie takes Savannah, Cole and gang. The dual points of view were a bit of a turn-off for me. I really could have used a little bit more couple time as well. I did love how the story twisted the current zombie trends. Especially after what happens to one of the heroines.

Favorite Quote "It felt like our entire relationship happened around two day intervals that always seems like a good idea t the time but never quite worked out as planned."