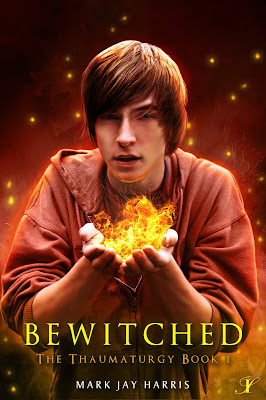 Is it love or is it witchcraft? He’ll never find out if he kills her first.

The first time Darren saw Samantha, she was floating above his high school gymnasium during a basketball game, invisible to everyone but him. Next time he sees her, she's sitting in front of him in class, wowing his friends and causing unexplainable things to happen that only he seems to notice. But things really get strange (and complicated) when his dying grandfather tells him that he is part of an ancient order, the “Pessum Ire,” whose duty is to destroy witches. What does he do now, since he’s almost positive Samantha is a witch…and he’s crushing on her pretty hard?

Darren is the middle child of a typical all American family- that is until his older brother dies. His parents shut down only going through the motions. Before his brother died- his parents, siblings and granddaddy seemed to have the perfect life. Now, the only one interested in his basketball games was his granddaddy. His granddaddy, Atavus, use to tell him and his siblings the strangest stories when they were younger. Darren never believed any of them, that is, until he saw Samantha. Samantha is a witch who looks and acts 17 yet in reality she is a heck of a lot older. She was born into a prophecy. One in which her own momma kills her. Her aunt Clara takes her away to keep her safe.

Bewitched is definitely the first book in a series. There is a lot of backstory given- Atavus and his history of being a Pessum Ire- Samantha and her witches background- the foundation of the Northern Coven. The roles of the supporting characters were also defined, in relation to what Darren is.

Darren is at first in denial of his birthright and then in confusion of it. He is all about his girlfriend Andrea, but can’t stop thinking about Samantha. Speaking of Andrea, umm yeah she is a little bit interesting. She wants to know where they are going but then can’t handle being around Crissy for a bit because she is different. I had to shake my head at this.

Bewitched is an intriguing start to a series with great potential. The supporting cast: Clara, Crissy and Mike were amazing characters with great timing. I enjoyed the way in which Samantha and Darren interacted. The pacing was good, and the plot-twists were surprising. I did got frustrated reading Bewitched- mainly due to the weird words “Pessum Ire”, Catadromus, Grimp and so on. I felt that there should have been maybe a glossary at the end of the book in case you needed to look an unfamiliar word up.

Favorite Quote “Life had to be easier when you didn’t totally grasp everything going on around you.”