In Chosen at Nightfall Kylie. . .
1. …nearly kills Lucas twice.
2. …has another boy become interested in her.
3. …acquires another stalker.
4. …is accused of having an affair with an older man.
5. …has an unwanted guest crawl over a bathroom stall when she’s trying to pee.
6. …gets kissed by two guys.
7. …finally makes a choice of which boy she loves.
8. …is forced to kill someone to save someone she loves
9. …tells a human that she’s a supernatural. 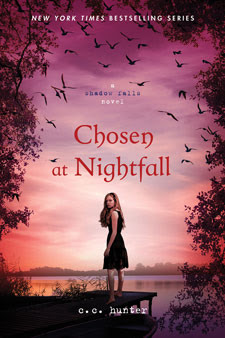 Kylie Galen's life hasn't been the same since her world was turned upside-down in Born at Midnight, Shadow Falls #1, and now an epic conclusion to her journey—not to mention a tough choice between two guys!—is brewing in Chosen at Nightfall:

When Kylie Galen left Shadow Falls, she thought it was the hardest decision of her life. Heartbroken and separated from everyone she loves, she has to embrace her abilities and what it means to be a chameleon. But as Kylie's journey comes to a close, she must return to the camp that started it all...and she must finally chose between the two boys who love her. The werewolf who broke her heart when he chose his pack over her, and the half-fae who ran from their intense attraction before they ever really had a chance. For Kylie, everything will finally be revealed and nothing will ever be the same.