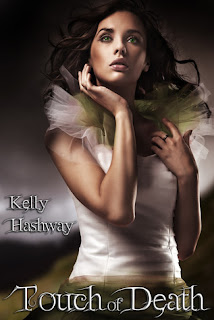 Jodi Marshall isn’t sure how she went from normal teenager to walking disaster. One minute she’s in her junior year of high school, spending time with her amazing boyfriend and her best friend. The next she’s being stalked by some guy no one seems to know.

Jodi’s deadly to the living and even more deadly to the deceased. She has to leave her old, normal life behind before she hurts the people she loves. As if that isn’t difficult enough, Jodi discovers she’s the chosen one who has to save the rest of her kind from perishing at the hands of Hades. If she can’t figure out how to control her power, history will repeat itself, and her race will become extinct.

I love books that follow the current trends- angels, demons, shape-shifters, vampires, werewolves, witches and zombies. So when I saw a book about zombies was released, I was there waiting in line.

The zombies are created by necromancers named Ophi, who have to be born between Nov. 29 and December 17. Sidebar- Thank goodness I missed that start date by ten days. Their blood has the power to give life or take it away. The zombies obey the commands of the Ophi that raised them from the dead. Ophi’s are not totally human- they have Gorgon blood. This was a cool twist to the necromancer stories.

Jodi got a little bit on my nerves. I understand that she was homeschooled but seriously how unperceptive can one teenager be? I wanted to shake her and say honey- they were dead, you touched them and they came back to life. Oh my goodness you touch them and they died. Stop touching people and animals for crying out loud. But again that could be ignored- she is having a very rough day or two. She thinks she has a stalker- Alex because she saw him staring at her once, twice, three times.

So here’s the thing- if Alex is a stalker why would you knowingly leave with him (common sense 101 see a stalker, walk/run the other way). But if you can get pass the whole creepiness thing about him, then yeah I can see how you might begin to have feelings for him. He did help out your family in a HUGE way- it’s just well the whole hot/cold thing he had going on did not endear him to me. The issue I had with their relationship development was that it was right after her last relationship ended. For some reason that did not sit will especially since her boyfriend was kinda awesome.

Jodi did grow on me though- she has a moral compass that the others around her seem to be without. The fact that she cares about the zombies and does not want to use them was pretty cool. The fact that she ends up being the Chosen one by Medusa none the less is even cooler. The scenes with Medusa were awesome as were the scenes with Hades. The parts with Jodi’s daddy were bittersweet and kinda gross. But if I were honest, it did take most of the book for me to begin to like her.

Alex on the other hand well was creepy in the beginning, then sweet, then weird and finally a pretty good male-counterpart to Jodi. His actions in the beginning also lingered in the background for me though. They literally dumbfounded me- even after they were explained. I get why, I honestly do, but dang I am not sure I could overlook the wrecking of the room and leaving such a hairy present for me to find if I were her.

The ending was startling and left room for the series to grow. I am looking forward to the sequel, I want to see how Jodi and Hades interact with each other. I loved how she dealt with the evil within the organization in the end. I am sure that there will be consequences to her deal with Hades. I also want to see what goes on with her mom- does she ever find out?


My Rating 3 stars out of the 5 (I liked the book, but was okay with interruptions.)


Favorite Quote “Necromancers bring the dead back to life. They don’t kill the living.” I’d read enough books to know that. All the books I’d read had been fiction, but I didn’t mention that.

Abbey- Mean-gal Ophi
Victoria/Tony- run the Ophi school and happen to be Alex’s parents
Tony- Jodi’s English teacher and Ophi trainer
Medusa- goddess, mother of all Ophi
Posted by Angela ReadingCave at 12:04 AM