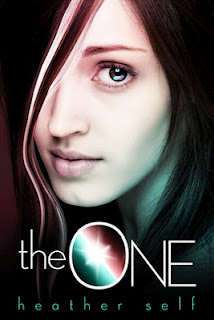 Author: Heather Self
Format: eBook
Print Length: 206 pages
Publisher: Self-published
Published: June 15, 2012
Stranded on Earth two thousand years they’ve waited for the arrival of the One: some to save her, others to kill her. With her birth, the ancient prophecy could at last be fulfilled and the doorway between the worlds would open. Those who know the prophecy believe this event occurred almost eighteen years ago, and now, they’ll stop at nothing to find her.

Seventeen-year-old Eveline has lived her entire life on the move and she hates it. She knows her parents believe she’s the One, and they’ve done whatever it takes to stay one step ahead of those who want her dead. But Eveline isn’t fully convinced that her parents’ beliefs match her own. What she does believe is that Leadville, Colorado may be the chance she’s been waiting for. The chance to be somewhere safe. The chance for her to make friends and have fun. The chance to finally date a guy. The chance to be a normal girl, at least as normal as possible for someone not human

All her life Evy has been on the run, moving periodically once her parents felt there was a danger.  You see, they believe that she is The One.  She however, rolls her eyes at this and kinda just rolls with whatever.  Not really believing her folks.
They move in the middle of her senior year but promise tat this si the last place they are going to be moving to.  So once settled Evy starts to make friends, Jenna and Kai.  She discover that she has an older brother, Liam.  She did not remember him but soon gets her memories back.  Of course, she has two swoon worthy guys that are fighting for her affections.
I absolutely adore Evy.  She rocks with awesomeness- from telling everyone they are crazy to telling off the guy who rejected her.  She is amazing.  The best part is once she accepts that they may be right, she demands that they get on board with her.
Now it would not be a paranormal romance without the romance part.  Evy has not one but two hotties trying for her love.

Just so you know I am team Chase all the way.  There I said it- I gave my disclosure.  Chase is a hottie from down under.  One whom understands responsibilities at the cost of one’s happiness.  He does take his responsibilities seriously.  Too bad though, he kinda well pushes Evy away.  Fingers and toes are crossed that he can fix this.

Reminder- I am team Chase.  First of all he is suppose to be the enemy, a Nerada.  They typically want to kill Evy- instead he just wants to kiss her.  Plus he seems a little too team Evy for me.  Something about his eagerness rubs me the wrong way.  But I hear he makes a good breakfast.
I adore this book.  Heather’s debut novel rocked my world and I for one could not put it down.  I’m biting my nails waiting for the second one to come out.   Knowing Heather the second book will blow our minds.  I just hope (hint, hint, wink, wink) that Chase will get the gal in the end.
Seriously, one of the best novels from a debut author that I have read this year.

Liam- Very protective older brother- with good reason.
Jenna- Liam’s other little sister, no relation to Evy.  She is a good friend though and always on Evy’s side.
Kai- Shy gal from school, has a sassy mouth though once you get to know her.
Posted by Angela ReadingCave at 12:05 AM