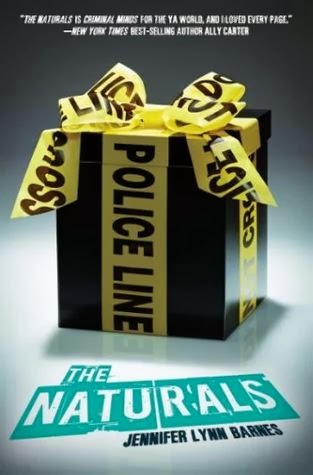 Seventeen-year-old Cassie is a natural at reading people. Piecing together the tiniest details, she can tell you who you are and what you want. But it’s not a skill that she’s ever taken seriously. That is, until the FBI come knocking: they’ve begun a classified program that uses exceptional teenagers to crack infamous cold cases, and they need Cassie.

What Cassie doesn’t realize is that there’s more at risk than a few unsolved homicides— especially when she’s sent to live with a group of teens whose gifts are as unusual as her own.

Sarcastic, privileged Michael has a knack for reading emotions, which he uses to get inside Cassie’s head—and under her skin. Brooding Dean shares Cassie’s gift for profiling, but keeps her at arm’s length.

Soon, it becomes clear that no one in the Naturals program is what they seem. And when a new killer strikes, danger looms closer than Cassie could ever have imagined. Caught in a lethal game of cat and mouse with a killer, the Naturals are going to have to use all of their gifts just to survive.

When Cassie was twelve she discovered her mother’s dead body, this changed her entire life.  Now she lives with her grandmother, Nonna.  Every Sunday there is a huge Sunday supper where all of her extended family comes to visit.  Too bad Cassie even after five years does not feel that she fits in.  So when the FBI show up and offer her a position in a school that would allow her to actually look for her mother’s killer she is all about it.

While at school, Cassie meets several other Naturals.  There are two guys at this school that could cause a love tri-angle later on in the series.  For now, Cassie is learning how to hone her skills.  That is until a serial killer fixates on her.  With little clues to go by, Cassie and Dean must profile this serial killer and determine what they want.   Why are they so interested in Cassie and in her mother’s murder?  Will they be able to save the kidnapped girl in time?

I like the chemistry between Cassie and Dean and Cassie and Michael.  So at this point I do not have a favorite guy, who I want her to pick.  This is highly unusually for me and I think speaks well of the writer’s ability to show that you can like two guys at once.  I did wish that there was a little bit more romance in the book, that would have moved things a long faster.

With all the background information laid out, The Naturals has the potential to be a great series.  While at times the book moved rather slowly, I have to say the suspense portion of the book was spot on.  The Naturals kept me guessing who the killer was up to the actual reveal.

Overall, The Naturals is a book that you can lose yourself in for a few hours and come away thinking great story.

Sloane- specialty is numbers and probabilities
Lia- specialty is deception, has a knack for picking out the lies
Agent Briggs- FBI Agent who is behind the naturals
Agent Locke- Cassie’s profiling mentor
Posted by Angela ReadingCave at 12:05 AM