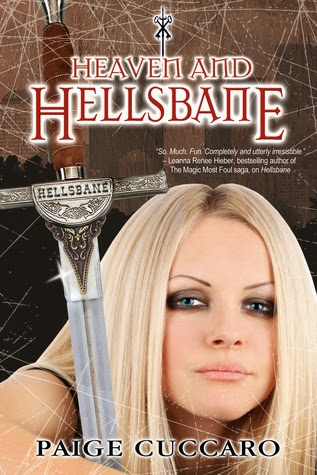 Someone’s killing angels and turning the half human, half angel illorum warriors against their angelic supporters. If the supernatural baddy behind the attacks isn’t stopped soon, Heaven itself could fall victim. The Council of Seven has called in the best they’ve got to find the killers, and no one’s more surprised than Emma Jane Hellsbane when it’s her phone that rings.

But when her own angelic mentor—and off-limits hottie—Eli is targeted, Emma takes it personally. With Emma hot on the trail of the growing army of assassins, though, hackles start to raise around her. Everyone wants to know if she’s in it to protect all angels or just one in particular. The Council has their suspicions…and so does Emma’s boyfriend.

Now Emma isn’t just fighting off demons, rogue nephilim, and Fallen angels, but she’s defending her honor as well. The problem is even Emma Jane isn’t sure of her motives. One thing she does know: if she doesn’t figure out the killers’ identities soon, she may not live long enough to know what, or who, she really wants.

It’s all in a day’s work as Heaven’s ultimate bounty hunter.

As an illorum, Emma Jane is supposed to fight demons and Fallen Angels in the name of Heaven.  She has to do this due to the sins of her father- a Fallen angel himself.  She must continue to fight demons and Fallen Angels until she kills her own father.  If she manages to hill her own father, she can get her life back.  Until then she has imposed a self-isolationism from all of her loved ones except for Officer Dan.  Who knows what she is because he is an untapped one- this does cause some tension on their relationship- he wants to help her.

Eli is her magister- an Angel mentor that tries hard not to intervene in the war.  During this war, Emma Jane and Eli have gotten close- some are beginning to think too close.  Tommy in the previous book did warn Emma Jane that she could mean Eli’s fall from grace.  While nothing had happened yet, the Council felt that it should intervene and give Emma Jane a new magister.

I was kinda disappointed in Emma Jane in this book.  In the previous book, she was responsible and faced the threat head on.  In this book, she goes off grid for a few days.  She is a bit full of herself not once admitting that she needs help. While she should be showing the Council respect even if she is mad at them, I felt at times that she was acting a little like a spoiled brat who was not getting her way.    Halfway through the book is a game changer, it will be intriguing to see how it plays out.  She is also unsure of what/who she wants.  A normal life or an illorum life?  Dan or Eli?  I seriously wanted to shake her at times.

Overall, I liked the book.  A fast easy read that will entertain you for a few hours.  Hopefully the next installment will answer all the questions that will pop in the readers head after the game changer.  (Trying hard to be spoiler friendly).

Favorite Quote “They’re a holy bunch of arses, they are.”

Officer Dan- Emma’s boyfriend, untouched illorum
Fraciel/Fred- Angel on the Council, does not like humans
Liam- an illorum friend of Emma Jane’s
Amon- Liam’s demon partner
Posted by Angela ReadingCave at 12:05 AM