Today Tiffany Truitt and Entangled Teen are revealing the final cover for The Lost Souls Trilogy, CREATORS. Along with an exclusive excerpt and a pre-order giveaway that Tiffany has set up on her blog!


On to the reveal! 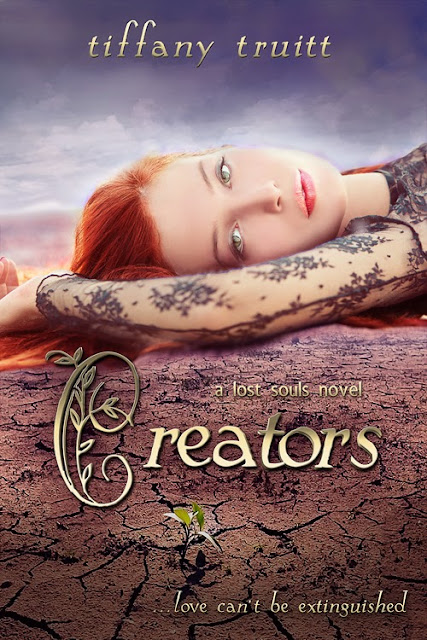 Blurb:
Heartbroken but more determined than ever after a tense showdown in the woods, sixteen-year-old Tess once again returns to the safety of her community of Isolationists. Bolstered by new alliances and desperate to protect those she loves, this time she knows she can return stronger and more powerful than ever to take back what is hers.
As she trains in combat and grows more confident, Tess receives beautiful letters penned by her forbidden love, the chosen one James, from his prison in Templeton. He is now serving as a bodyguard to the creators—the team of scientists who created artificial life in the first place. And what he has discovered about the true origin of the illness that halted natural life could change everything.
Enemy will become ally and death will bring new hope in this stunning conclusion to Tiffany Truitt’s epic Lost Souls trilogy.
Goodreads/Amazon
Exclusive Excerpt!
Somewhere, James was just as trapped as I was.
I thought of the morning when we lay with each other, curled against one another, never beginning and never ending. How we’d stayed like that till the sun began to rise.
James had reached down and pulled me off the ground. He wore a satisfied grin on his face. “Someone is mighty proud of himself,” I teased.
He laughed. It bounced through the forest, calling it awake. Readying it for the day. “I’m just insanely happy.”
I stood on the tips of my toes and kissed him gently on his scar. “I’m insanely happy too,” I whispered.
James looked down at me, and I was lost all over again. I would never tire of looking into those mismatched eyes. They didn’t make him different. They made him him. He chuckled as he reached over and pulled a leaf from my tangled hair. “They’ll know just by looking at you that we’ve been up to no good.”
“No good?” I purred. “I thought it was very, very good.”
James growled and lifted me into the air. I wrapped my legs around his waist as he pressed his lips hungrily against mine. I moved my hands to his hair, curling my fingers into it, attaching myself to him. I never wanted to let go. Every part of me ached to be touched by him, and every part of me ached to touch him right back.
“Do you know how much I love you?” he breathed into the base of my neck. His lips fluttered against my skin.
I nodded, kissing the top of his head. “As much as I love you.”
James slowly put my feet back on the ground. He cradled my face in his hands. “That will never change. No matter what.”
I looked deep into his eyes. “I know.” Because I did. It was one of life’s few assurances. I would always love James.
I pressed my lips once again to his scar. “I adore this scar,” I whispered, unable to hide the smile that seemed etched on my face all morning.
“You’re enough to drive a man crazy,” he said The tremble of his voice caused my toes to curl. I wanted him again. And again. And again.
My fingers traced the waist of his pants. “Tonight?” I said, knowing full well it was a promise that I probably wouldn’t be able to keep.
James grabbed my hand and brought it to his lips. “Tonight,” he echoed.
As the sun climb higher into the sky, I knew our moment was coming to an end. James reached down and placed his hand over my heart. “Thank you,” he said.
“For what?” I asked, my voice choked with emotion.
“For everything.”
As the memory slipped away, I looked back up at the night sky. Praying and hoping that James knew how much I wanted to thank him too.
For everything. 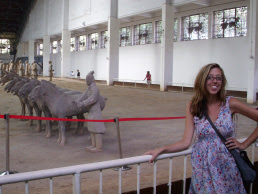 Tiffany Truitt was born in Peoria, Illinois. A self-proclaimed Navy brat, Tiffany spent most of her childhood living in Virginia, but don’t call her a Southerner. She also spent a few years living in Cuba. Since her time on the island of  one McDonalds and Banana Rats (don’t ask), she has been obsessed with traveling. Tiffany recently added China to her list of travels (hello inspiration for a new book).
Besides traveling, Tiffany has always been an avid reader. The earliest books she remembers reading belong to The Little House on the Prairie Series. First book she read in one day? Little Woman(5th grade). First author she fell in love with? Jane Austen in middle school. Tiffany spent most of her high school and college career as a literary snob. She refused to read anything considered “low brow” or outside the “classics.”
Tiffany began teaching middle school in 2006. Her students introduced her to the wide, wonderful world of Young Adult literature. Today, Tiffany embraces popular Young Adult literature and uses it in her classroom. She currently teaches the following novels: The Outsiders, Speak, Night, Dystopian Literature Circles: The Hunger Games, The Giver, The Uglies, and Matched.

Tiffany is proud to call herself an educator and Young Adult author. Her first book will be published by Entangled Publishing.

Also Tiffany has a Pre-Order Contest going on over at her blog http://tiffanytruitt.wordpress.com/ three lucky people that pre-order CREATORS will win a signed Cassandra Clare poster!

Posted by Angela ReadingCave at 12:15 AM