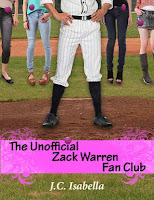 
Welcome to the big leagues. To secrets and scandals. It's all about the game. Who's playing. Who's not. Who has no idea about the game. And...wait, what game are we playing?

I'll leave that for you to decide.

Where to start is the big question for Chloe Baker. How was she supposed to explain to Zack Warren that she started a fan club for him when she was a kid? It was just a game. A way to make friends and have fun. She never thought it would spiral out of control. And never. In a million, gazillion years, did she think it would follow her to college. How could she tell him her best friend Lana kept the club alive? That she had nothing to do with the craziness?

Chloe didn’t understand why she cared so much about Zack's opinion of her. She hated him. He hated her. They had very mutual feelings of dislike for each other. So he'd just hate her even more when or if he found out.

It's Zack’s junior year of college. He’s got things to worry about. Scouts from the major leagues. Baseball games. Contracts. Grades.... His father ran away to Vegas with Chloe's mother. He didn’t have time to worry about a girl. But he did. He worried about Chloe a lot, especially with that jerk Max sniffing around her. It's weird though, to like your stepsister, right?

But Zack could argue that he saw Chloe first. Way before his dad met her mom. He was too young to stake a claim. But just didn’t care anymore.

Cute storyline, light read.  The banter between the two main characters was charming.  They avoided each other for years, denying their feelings.  Only to have to face them head on after their parents marry each other.  Keep in mind that they were not raised together, nor are they blood related.  They are technically step-siblings but their parents started dating and married after they were in college.
Zack was sweet and very insightful as to why he took the courses of action that he did.  Chloe at times was not so refreshing.  Such as during the fight they have after the pool scene and her reaction to the party scene.  Plus she seemed just a little too weak for me; meaning she cried a lot.
While this book did not have a must read right now reaction, I still mention it to other readers.  Especially if I know that they are in between much anticipated release dates from their favorite authors.