I have been very vocal about my love the Transplanted Tales Series by Kate SeRine.  It really does rock

You reap what you sow…

Saying Nate Grimm has a dark past is an understatement. Fortunately, no one’s bothered to look too closely at the Fairytale Management Authority’s lead detective and part-time Reaper. And that’s the way Nate wants to keep it. For after centuries of torment and loneliness, he’s finally found happiness with the hot and hard-charging love of his life, Tess “Red” Little.

Of course, his love for Tess is the reason there’s a posse of Reaper judges after him, led by a sadistic bastard acquainted with Nate from once upon a time. Now, Tess will pay the price for Nate’s transgressions unless Nate severs his ties to the transplanted Tales—and Tess—forever. His enemy has the advantage in speed, malice and brutality. But the Reapers have underestimated the depth of Nate’s love and devotion. And the fury of his wrath… 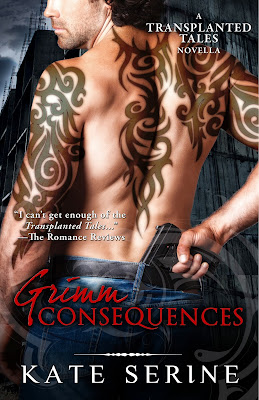 
The second he vanished, I gave in to the weight of my eyelids. I could hear Tess still calling to me, ordering me to keep it together, to fight off the poison, but I couldn’t. There was no defense against the inevitable. Eventually, death claimed us all. And I was no exception.

Kate SeRine (pronounced “serene”) faithfully watched weekend monster movie marathons while growing up, each week hoping that maybe this time the creature du jour would get the girl. But every week she was disappointed. So when she began writing her own stories, Kate vowed that her characters would always have a happily ever after. And, thus, her love for paranormal romance was born. Kate currently writes urban fantasy and paranormal romance and is the author of the award-winning Transplanted Tales series, available from Kensington Books.

Kate lives in a smallish, quintessentially Midwestern town with her husband and two sons, who share her love of storytelling. She never tires of creating new worlds to share and is even now working on her next project.
Posted by Angela ReadingCave at 12:05 AM