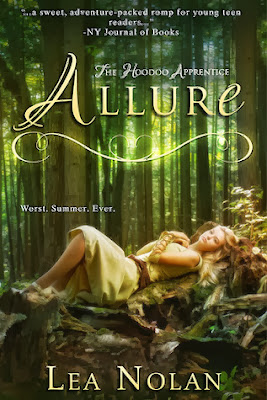 Emma Guthrie races to learn the hoodoo magic needed to break The Beaumont Curse before her marked boyfriend Cooper's sixteenth birthday. But deep in the South Carolina Lowcountry, dark, mysterious forces encroach, conspiring to separate Emma and Cooper forever. When Cooper starts to change, turning cold and indifferent, Emma discovers that both his heart and body are marked for possession by competing but equally powerful adversaries.

Desperate to save him, Emma and her twin brother, Jack, risk their lives to uncover the source of the black magic that has allured Cooper and holds him in its grip. Face with the horror of a soul-eating boohag, Emma and Jack must fight to resist its fiendish power to free Cooper long enough to join their strengths and face it together, before it destroys them all.

A fabulous addition to a great series! Allure has it all: murder, mystery and well of course romance.

Picking up literally where Conjure left off, Emma and Miss Delia are looking for a way to break the Beaumont Curse. They have little time and the sense of urgency is real. What better way to screw up a good hunt then throwing in a mystery guest- in the form of Miss Delia’s wayward great granddaughter. Taneea is the opposite of Emma in every way. A beautiful yet mean girl who is extremely forward with Emma’s boyfriend, Cooper. There is something not right with this gal.

Cooper starts off the same loving, adorable guy that he was in Conjure but midway through the book something happens. He stops working to getting the curse broken. Emma and Jack cannot find him for long periods of time. Something or someone is way more important than certain doom.

Emma throughout this book keeps a level head and her eyes on the goal. She will save Cooper, even if she gets heartbroken along the way. You can tell that she truly does care for him, especially after how he treats her.  Will she find a cure in time?  Is Cooper's actions really a product of his heart?  Or is there something more sinister at work?  Will she stop referring to her spirit guide as spirit guide?  (This was my only complaint about the book.) I mean seriously, she could just give her spirit guide a name something like Sally.

In the previous book, Conjure, Jack was kinda mean.  He was under a curse and well his flesh was falling off.  So you had to give him some room for an attitude.  In Allure, it is like he is a new and improved brother.  It's refreshing to see him be so nice to his sister- especially when his bestie does what he does to her.

All will be revealed, but with a wicked twist of fate Nolan leaves the reader waiting for the next installment.